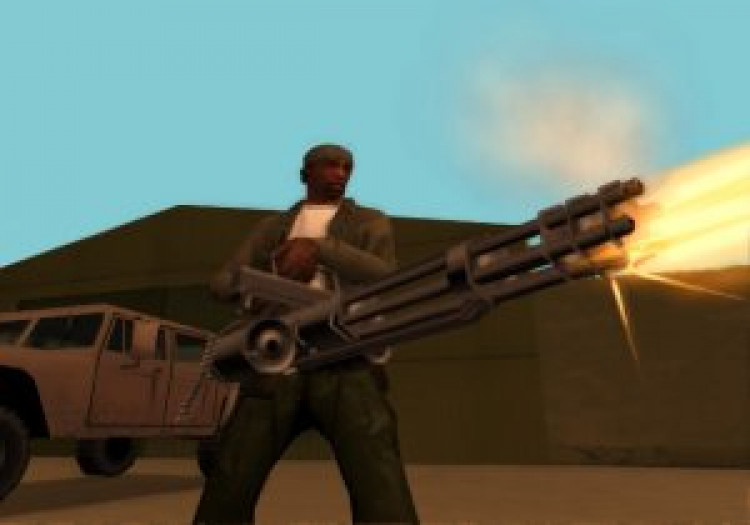 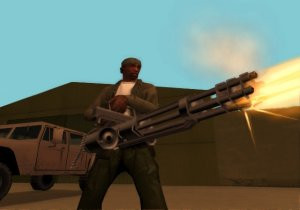 Rockstar Games a accompagné ces screenshots d’une description pour chacune des armes (en anglais) : *Vulcan Mini Gun - This formidable weapon is the player’s best friend. Designed to deliver massive and withering barrages of ammunition at an alarming rate of fire, this weapon is designed for total destruction of the target and anything around it. Despite its massive size and weight, the gun is portable enough to be carried—and fired—on the streets of San Andreas. Police responding to an incident where a mini-gun is in use would be quick to call in SWAT to deal with the menace. An intricate piece of machinery, its belt driven mechanics will turn the barrels even if the gun is not firing, a sound that eerily forecasts the destruction that is about to be unleashed. Hold R1 to spin up the barrel and squeeze L1 to fire.

Heat Seeking RPG - RPGs and other shoulder-fired missiles have long had a place in Grand Theft Auto. The STINGER is the next level. Lightweight and portable, this shoulder-fired guided missile system is designed to shoot down low-altitude jets, propeller-driven aircraft and helicopters. The fire-and-forget system allows the player to lock onto a heat source, usually a car or plane, fire the weapon, and begin acquiring new targets before the warhead has even destroyed the first target. To activate, bring up the targeting reticle by pressing R1. Continue holding down R1 and center the viewfinder on the target. The reticle will acquire the nearest target, and then change from green to yellow and finally to red, indicating that you have achieved target lock. You can fire the weapon at any stage of the lock-on process, but the closer to red, the more effective your strike will be. The production, research, and development of the Stinger Missile System is a secret, but intrepid pilots flying over the deserts on the outskirts of Las Venturas have a ton of stories about near misses with the Stinger.

M4 - M4-is the modified version of the M-16, the shortened stock and barrel makes it more compact while still retaining the accuracy and power of its cousin. The weapon will allow the player the pinpoint accuracy to target an opponents specific body parts or vehicle tires. One particularly satisfying feature is the ability to target gas tanks. A single well-placed round will cause any car in San Andreas to explode—aim for the gas cap to find out how decidedly badass this new feature is in action. Kneeling greatly increases the accuracy of the M4, try kneeling as often as possible when using the weapon. Even while kneeling, it is possible to roll side to side while holding R1 by pressing left or right on the left analog.

To the concern of San Andreas’ police forces, the M4 is readily available at Ammu-Nations across the state.

Tec-9 - A longtime favorite of gang members on the streets of Los Santos, the Tec-9 is a relatively cheap firearm made with low-grade stamped metal. One of the more interesting new features is that the player can dual wield Tec-9s, evening up long odds in the middle of a gang fight, increasing your respect and power in the ‘hood. Once you’ve upgraded CJ’s weapon skill to the point where he can hold two weapons (Hitman skill level), all you need to do is find another weapon and he will automatically hold 2. All ammo between the guns is now shared, and reloading happens automatically. Rate of fire is effectively doubled, perfect for cases where you really want to kill someone—fast.

Desert Eagle - This handgun delivers an unparalleled degree of accuracy and power with a distinctive feel that players will pick up on immediately. Originally intended to be target/sport pistol, players will use this weapon for the immense stopping power the handgun’s .50 caliber rounds deliver to a target—stopping assailants in their tracks, usually with one well placed shot. Because of its significant recoil, it’s almost impossible to hold onto at first. Look for higher levels of skill with the weapon to reduce this effect and yield quicker reloads and accuracy. The Desert Eagle is even deadly when out of auto-lock range, as a proficient shooter can fire in free target mode and still achieve one shot kills. Hold R1 and line up the sights on a target. The benefit of this approach is it allows sniper results with the free movement offered by a handgun.*